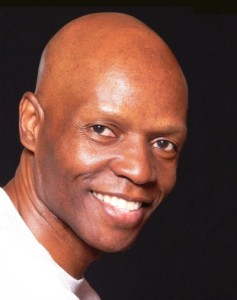 By Myra Blackburn, Special to the Sentinel
Published November 27, 2014
http://lasentinel.net/nijel-binns-showcases-art-in-south-l-a.html

It was Friday Afternoon on November 21, while strolling through Macy’s Department store inside the Baldwin Hills Plaza; I saw a sign placed on the side of Macy’s escalator wall. It read, “The Museum of African American Art, Upper Level.” With great curiosity, I decided to take the escalator to the upper level, where I entered “The House of Nijart,” filled with sculptures and artwork.

Sculptor Nijel Binns, born in England created a 30 year retrospective exposition, showing Africans and their contributions and inventions throughout the world. He displays sculptures and paintings that he has created depicting musical legends and entertainers like Michael Jackson, Stevie Wonder, and Celia Cruz. One of his treasures is a black and white portrait photograph of himself with the, late Actress Shirley Temple Black that was taken in 2002 at the 20th Century Fox Studio lot during the unveiling of Nijel’s life-sized bronze sculpture of the famous child star. Shirley Temple Black passed away on February10, 2014.

He remarked on the irony and significance of this portrait. In the1930’s, White America criticized the film with Shirley Temple and Tap Dancer Bill “Bojangles” Robinson for holding hands while dancing down the stairs together in one of Temple’s most famous scenes. Thus, this film exemplified color barriers broken or extended into the 2st Century. Now, the only bronze portrait sculpture of the famous actress has not only been crafted at the hands of an African American Sculptor, Nijel Binns, but this portrait also captures a moment in time with Shirley Temple, with his left arm extended around her shoulders, free from any criticism or backlash.  Before such racial barriers existed in United States or throughout the world, Binns takes me through a journey of various artworks on the African Moors. One section of the exhibition consists of art depicting African Moors and their civilization, which flourished in the wake of Muslim conquest that extended from Spain in 711 AD to parts Europe and Asia. Binns says, the inventions of medicine, science, technology, and arts still continues to exist in Europe, even after the Moors were expelled from Spain nearly 800 years later in 1492.

In fact, the African Moors contributions did not stop there, “Africa was the birthplace for Martial Arts,” Binns said. He said this was long before Martial Arts became accepted and known in Asia as well as throughout the world.  As matter of fact, The Nuba Wrestling paintings he presents on display depicts the martial arts forms and skills adopted by the moors and documented in a book that he published in 1990 titled “Nuba Wrestling: Original Art”.  I wasn’t the first one who spoke about this,” Binns said. “The legendary Martial Artist Mas Oyama said that Martial Arts first began in Africa.” Binns said this piece of information was never acknowledged in Asia or other parts of the world perhaps.

In addition, he describes an artwork derived from a place in Egypt, Africa called Beni Hasan. There are murals in three rock tombs with hundreds of illustrations on weapons, empty hand combat, and stick fighting that Nuba Egyptians and later the Moors used during their battling days, which is dated over 2,800 years ago B.C. However, the presence of Africans continued to flourish in other parts of the world as well. Binns has created a 16 foot bronze Statue called the “Mother of Humanity” or MOH that celebrates the influences that Africans had and is looking to have this statue built in Australia, Brazil, China, India, and Spain. The first monument as unveiled at 10950 Central Avenue at the Watts Labor Community Action Committee in Watts, on Mother’s Day, May 11 1996 in Los Angeles.

Binns recalls his inspiration he drew on for creating the “Mother of Humanity” when he visited the Statute of Liberty in New York City, New York as a child.  Later he became mesmerized with its history and how it was invented in the first place. According to the historical accounts, in 1865 the politician and law professor Edouard Rene de Laboulaye who was also the Head of the French Anti-Slavery Society, and Sculptor Frederic Auguste Batholdi were at a party one evening when they both created the idea that a Statute of Liberty should represent freedom and liberty for both the French and the United States of American society.  In comparison, Binns envisions creating a 313 foot tall Monument, as a gift from the people of America to the people of Africa, which history shows is the birthplace for all humanity.

Binns has a collection on exhibit that is beautiful, incredible, educational, and thought-provoking and reflects his personal life and the contributions of Africans around the world. His exhibit is located on the Upper Level of the Macy’s Departments Store inside of the Baldwin Hills Plaza from Thursday through Sunday from 12 noon to 5pm. The exhibit runs from September 14, 2014 thru January 4, 2015. 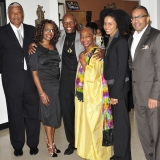 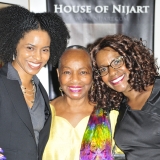 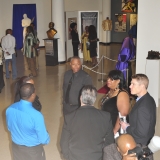 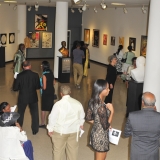 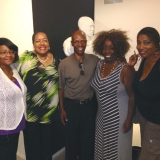 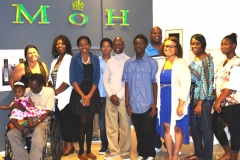 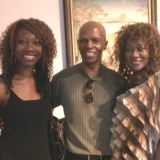 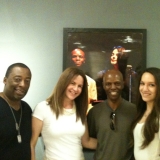 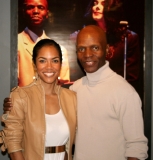 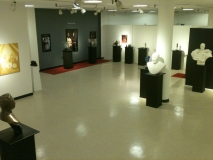 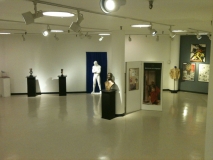 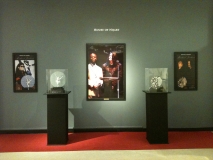 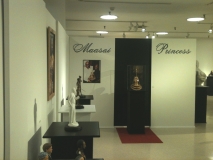 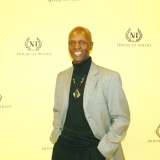 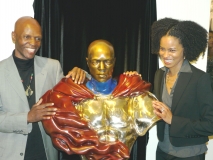 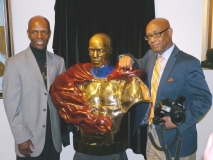 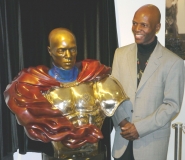 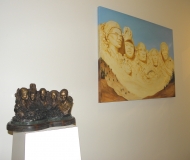 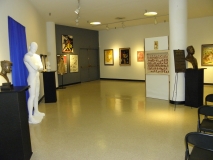